Seibu Electric & Machinery Co., Ltd., located in Koga-shi, Fukuoka Prefecture, is a mechatronics manufacturer that develops and manufactures logistics material handling systems, industrial machineries, electrical discharge machines (EDM), and machine tools. The company deals with a number of foreign companies and develops products for the global market. In particular, the company has a reputation for ultra-precision technology and mechatronics technology, and is developing in a wide range of fields such as automotive, electrical and electronic equipment, precision machineries, molds, petrochemicals, foods, civil engineering, and ships. The latest example demonstrating its advanced technical strength is the ultra-precision wire electrical discharge machine (WEDM) "MEX15” which was announced this spring.

Yoshihiro Ito, a developer, explains: "A WEDM is an electro-processing machine that cuts without a blade. Electricity is passed through a thin wire electrode of about 0.2 mm in diameter. Sparks sputter between the wire electrode and work piece and cut while gradually melting it. It is mainly used in the automotive and medical fields, and more recently in factories that manufacture smartphone parts and molds." According to Ito, five domestic manufacturers make this type of WEDM, and Seibu Electric & Machinery is one of them. With its latest model MEX15, Seibu Electric & Machinery looks to further opportunities to expand its market share.

"MEX15 is a high-end machine for ultra-fine processing that can use ultra fine wires as small as 0.03 mm. Combined with a new machine structure that minimizes thermal displacement, it features a new multi-touch CNC and automatic feeder device, significantly improving process accuracy and operability. During the development process, the goal was to achieve more than industry-standard product capabilities, and we succeeded in vastly improving accuracy and cost reduction.” The three-dimensional design using Inventor Professional was the catalyst to solving the challenge of balancing high performance and cost reduction,” Ito continues.

"WEDMs are processing machines that microfabricate objects placed on the table by moving vertically and horizontally or at an angle. Although the difference is either moving from the work side or the wire side, machines produced by manufacturers share a standard form to a certain degree, and roughly have the same configuration. This time, we adopted a totally unique one-of-a-kind drive format, and the shape and mechanical structure of the base are completely different from the conventional machines.” In the same way, the distribution of stress is different from the conventional machines, so past empirical rules do not apply. "Therefore, we repeated the analysis a little at a time between the designs so there is no impact on the accuracy, and pushed it forward by comparing with previous analysis. We were keenly aware of the power of Inventor, which enables seamless and smooth design and analysis.”

And for Ito himself, it was the first new product development utilizing 3D from scratch. "We are really happy that we used Inventor. We would have probably needed more than double the time and effort if we had used 2D.”

Our wire electrical discharge machining (WEDM) machines are characterized by high precision that cannot be produced in mass production. For that reason, we have pursued our own path which is different from mass-produced companies by applying a final finish called "scraping” using human hands. Of course, enhancing the design efficiency while maintaining high accuracy is the primary goal of 3D design with Inventor. Fortunately, this goal is steadily being achieved, and we are now expanding our market share mainly in the ultraprecision processing field. We hope to further utilize Inventor in the future and to improve design quality.

"It was 10 years ago when our design department started introducing 3D in design. That was when I was transferred to the design department from another department.” According to Ito, the electric discharge development division at the time was using third-party 2D CAD for most of the designs, and the 3D CAD they had just started trialling was not used at all. Ito had not used CAD for a decade, and had to learn how it operated, so he thought that "if I am going to learn CAD from scratch, I might as well learn the latest 3D CAD.”

"We were trialling three different 3D CAD products from different companies at the time, including Inventor, and I tried them all. Obviously each had its own unique features, but Inventor was the most intuitive to use. At first, I contacted SCSK technical support very often, but I learned it myself without reading the manuals.” As mentioned earlier, people around him were still using 2D CAD, but Ito, who started using Inventor in that type of an environment, quickly realized that "3D CAD would be much more efficient than 2D in design.” 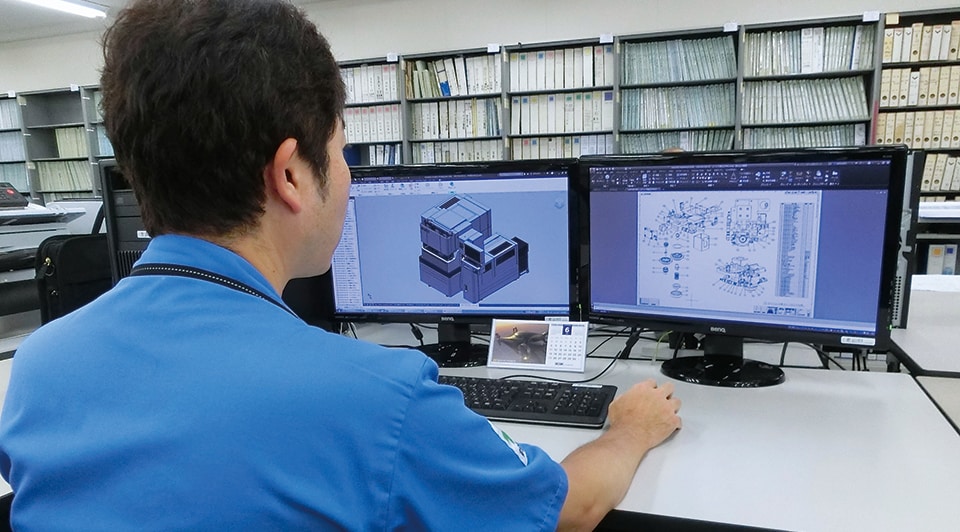 "There were few people in design, so I was immediately given a development theme. For a while, I used Inventor for modeling, and later performed DR (Design Review) as the design progressed." DR is a presentation the designer makes to the company, "This is what I will do" for a given specification. Conventionally, 2D drawings were used, but it was difficult to explain how the machine work in the 2D drawing and it was often time-consuming. "It was very well received when I showed and spun the 3D model. It triggered the shift to 3D designs."

In this way, Ito's 3D presentation led to the company’s rapid deployment of 3D designs. Soon the company purchased more Inventor licenses, and gradually other mechanical designers started experimenting with this and it accelerated the spread from there. "Once you use Inventor, any designer will realize how efficient the 3D design is," Ito says. The company found that the "rework” associated with the 2D design was drastically reduced, resulting in higher quality designs in a shorter period of time. This turned many designers into Inventor users.

"Wire electrical discharge machines have many moving parts, so it is difficult to check their complicated interference using 2D CAD, and we cannot cover everything at the design stage. Often, we found out that they actually did after we assembled a machine, and rework occurred frequently. 3D got rid of such rework. Ito thinks that assembling using Inventor is almost the same as assembling the machine. Therefore, 3D designing makes it impossible to determine whether "bolts do/do not fit" and "easy/difficult to install using tools". "In addition, it was important to be able to analyze. This ability of providing easy analysis made it all possible to come up with a unique drive format, and reduce weight without compromising on the accuracy.”

3D effects are expanding beyond design

Ten years have passed since the full-scale introduction of Inventor. All designers of the electric discharge development division now use Inventor for 3D designs. It is clear that the design quality and work efficiency of this division have improved. "Because of this, the company now maintains and improves the design environment," Ito laughs. He is pleased that they started to receive orders for MEX15 this spring and with some early inquiries, its business is off to a good start. In addition, 3D models are used for visual designs such as operation manuals and catalogs, and the impact of 3D design is steadily expanding into fields other than design. 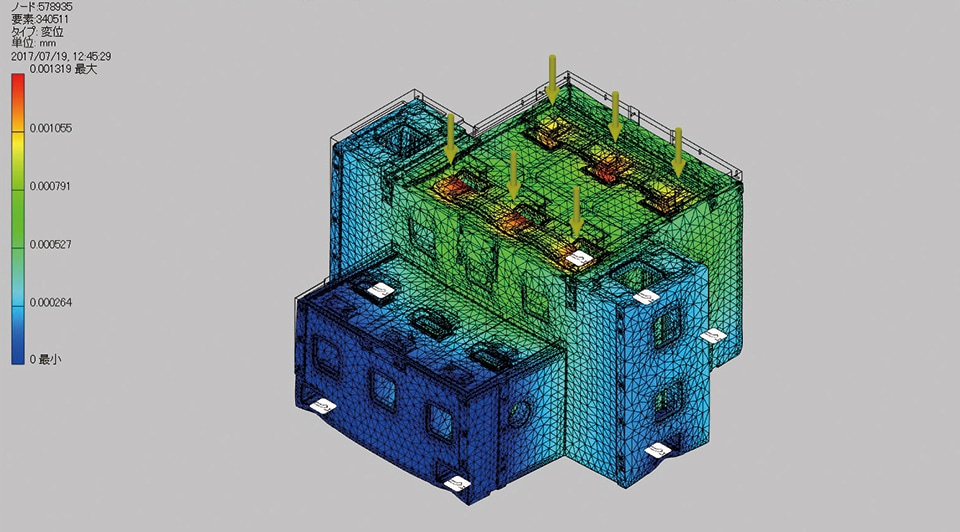 "Going forward, our design division aims to switch 2D CAD from other companies to AutoCAD. As interacting other companies' 2D CAD with Inventor is time-consuming, we want to achieve seamless operations by switching to AutoCAD which is highly compatible with Inventor. More importantly, AutoCAD is the industry standard.” Ito appears to be interested in any new technologies in fields related to their product development, including new products from Autodesk. "We expect Autodesk to provide information on new products and new technologies such as VR. We would like to actively incorporate technology if that seems to be able to capture the products in the future, and if there is the opportunity, we would like to participate in online seminars provided by Autodesk.” 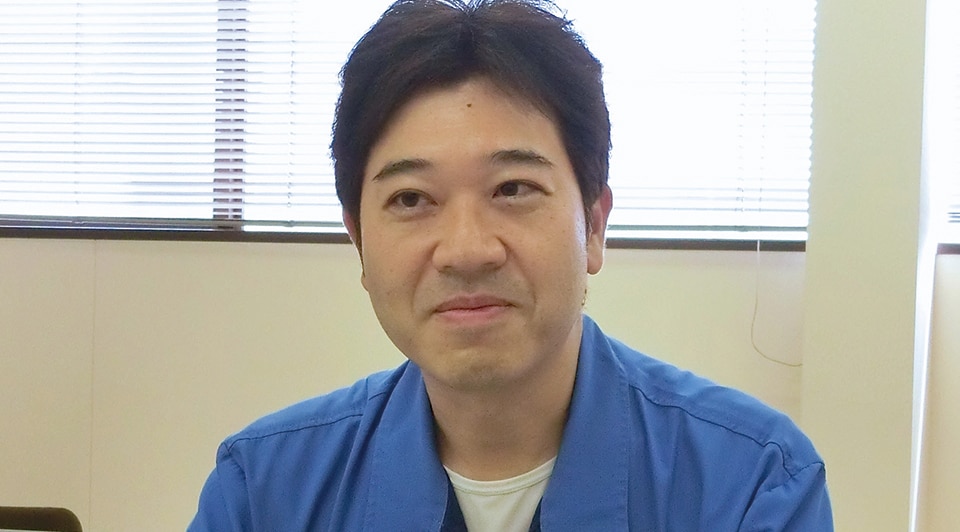